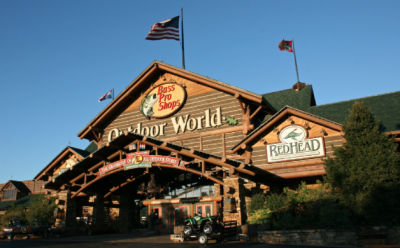 However, the retailer became unhappy with the way Bluegreen Vacations had been engaging in high pressure sales tactics at the kiosks and how this had created a negative experience for their customers. Bass Pro Shops, which operates over 170 stores throughout the United States, also claimed that Bluegreen Vacations had not passed on enough commission to the retailer. The two companies entered into an agreement in 2007, the agreement allowed Florida based timeshare giant to operate kiosks in some Bass Pro stores in exchange Bluegreen Vacations were required to pay a commission on the resulting sales. Bass Pro didn’t offer details about Bluegreen’s sales tactics. However, the relationship has soured to the point that Bass Pro Shops in April sued Bluegreen. The retailer said it was owed $10 million in commissions that Bluegreen has refused to pay.

The new deal calls for Bluegreen to pay Bass Pro Shops a set annual fee of $70,000 at each Bass Pro and Cabela’s store where it operates a sales kiosk. The companies’ contract extends through 2025. Bluegreen said Bass Pro Shops accounted for 14 percent of its $254 million in timeshare sales in 2018. Bass Pro drove 15 percent of Bluegreen’s business in 2017 and 16 percent in 2016.

In a separate lawsuit filed this year, nearly three dozen timeshare buyers from around the country sued Bluegreen and Bass Pro Shops. The consumers said they were lured into high-pressure sales pitches, then sold expensive shares in units that they claimed were overpriced or in poor repair.

“In addition to inducing purchases through fraudulent sales tactics, once Bluegreen convinces owners to purchase a time-share interest, it traps them in a valueless resale market, leaving them with few options but to continue paying their monthly mortgage and maintenance fees,” the suit says.

Bluegreen Vacation club is a points-based, deeded vacation ownership program, which connects over 212,000 owners with 69 Club and Club Associate Resorts and has access to more than 11,000 other hotels and resorts through partnerships and exchange networks.