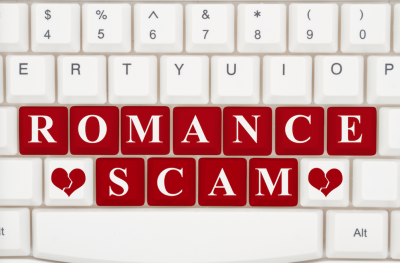 Police in Ireland have issued a warning after a woman handed over €48,000 to a fraudster. According to police, the woman was showered with gifts over a 13 month period, before he asked her to invest in his business.

The fraudster invested a considerable amount of time and effort in his victim. Over the course of the romance scam, he sent her expensive gifts including perfume and scarves. She was married at the time and delayed reporting the incident to police.

Police in Ireland are issuing the following advice:

Romance scammers use companionship and friendship to target victims. Their end goal is to obtain money from you, getting you to pay for goods or services. They communicate with you, using social media networks, online forums and internet dating sites.

What to look out for?

They may ask you to communicate offline using instant messaging, texts or phone calls to develop a strong emotional relationship. They will ask you a lot of personal questions and rarely divulge anything truthful about themselves. They may ask you for money, stating they are experiencing financial difficulties through no fault of their own. They will make arrangements to meet you, cancel at the last minute, you will probably never meet these people face to face.

How to prevent yourself from becoming a victim?

1. Only use reputable websites

2. Be very careful about how much personal information you share

4. Trust your instincts, if something doesn’t feel right, end communication or call the authorities.

Police in Ireland are working with Europol to tackle the problem of romance scammers and particularly the organised criminal gangs who operate them.

Earlier this week, in response to valentines day, Action Fraud revealed victims of romance fraud lost an average of £11,145 each last year. This was a 27% increase on the previous year and most of the victims are women.

Diana Fawcett, Chief Officer at Independent Charity Victim Support Said: “Romance fraud affects victims both emotionally and financially and for many the impact can be long-term. These scams can be extremely sophisticated and victims should not feel ashamed or embarrassed and shouldn’t blame themselves in any way. It’s important that victims know there is help available to them and we would encourage them to seek support.”

What is Romance Fraud?

Romance Fraud happens when a victim is tricked into thinking they have entered into a genuine relationship with someone they have met via a dating app, online profile or through social media. In reality, the victim is unknowingly communicating with a fraudster, who’s only intention is to gain enough trust to then steal their money, personal information or even identity.

The report also showed that the average age of a romance fraud victim is 50 and that 63% of dating fraud victims are female who lose twice as much on average than males.

It is thought that these numbers do not accurately represent the true scale of the problem, as most victims feel embarrassed or ashamed to have fallen victim and never report it to the authorities.

2. Analyse their profile and check the person is genuine by putting their name, profile pictures or any repeatedly used phrases and the term ‘dating scam’ into your search engine.