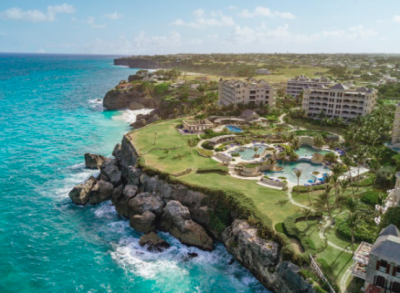 Hilton Grand Vacations has announced that it is expanding its timeshare holdings to the Caribbean, and is planning a purchase of The Crane Resort in Saint Philip, Barbados. It is expected to sell for $54.6 million.

Hilton Grand Vacations is acquiring the existing one, two and three bedroom timeshare suites that operate and are currently owned by Millennium Investments Ltd. The deal will take 3 years to complete but sales will start by the end of this year. The Resort will be available for existing Hilton Grand Vacations members from January next year.

The Crane dates back to 1887, when it first opened its doors as Barbados’ first resort and is the oldest operating resort in the Caribbean. It is located on 40 acres of beachfront and amenities include a clifftop pool, a day spa, fitness centre, kids club, gardens and seven restaurants. Hilton Grand Vacations will rename the resort ‘Hilton Grand Vacations at the Crane’ and marks the continuing expansion of the brand and presence in the market.

When they returned home and spoke with their children about the deal they had signed, they realised they had made a huge mistake which they could not afford. However following the incident, a local newspaper published an article detailing what had happened. Wyndham agreed to cancel the couples contract immediately, presumably in order to avoid any negative press. A spokesperson for Wyndham said that the couple were considered a hardship case and eligible for cancellation.

It is important to remember that in Florida the law is very different to the UK, where we have a statutory 10 day cooling off period. This means if you want to cancel any contract you enter within 10 days, you will be able to do so without any trouble. However in Florida, many consumers mistakenly believe they have three days to cancel the purchase contract. There is no mandatory cooling off period under Florida law.

In relation to timeshare, the law has been adjusted slightly. If you have purchased a timeshare, you have the right to cancel the timeshare contract, up until midnight of the 10th calendar day following the date you signed the contract. Or the day on which you received the last of all required documents, whichever occurs later. And this might not be enough time for some people, especially if you are still on holiday during this period. So it is important not to enter into any timeshare contract until you have fully researched it and have made a decision beforehand.

The lawsuit was brought in June 2017 by a group of 11 Westgate timeshare companies. Westgate claimed that Castle Law Group had been forcing timeshare owners to breach their contracts with Westgate, so as to earn large sums of money from owners and not providing any of the services they promised to their clients. The owner of Castle Law Group has since filed for bankruptcy.

It is also important to remember, that purchasing a Timeshare should NEVER be viewed as a financial investment. Timeshare is an investment in lifestyle, in future holidays and family time together. There is almost no resale value to a Timeshare.

The mis-selling of holiday products is, unfortunately, common practice within the holiday industry and these types of crimes often go unreported by the most vulnerable in our society, and criminal convictions are few and far between.