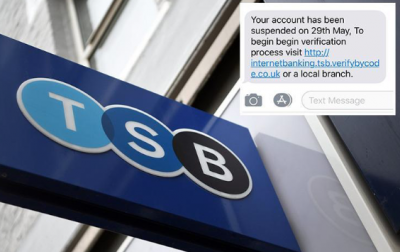 A family from Solihull were disgusted when their bank told them they would not give back £25,000, which was stolen from their savings account. Jodh Cusbia was contacted from what seemed to be a genuine number from TSB and that the woman he spoke to was so convincing, he had no idea that anything was wrong.

Years of earnings were wiped out in seconds. Jodh Cusbia, from Solihull, could hardly believe it when £25,000 was taken from his account, in what he thought was a legitimate phone call to the bank. It began when Mr Cusbia received a text, alerting him to an unusual transaction. He says that the call was from a number he had previously received genuine texts from. The message contained a phone number, which he called, and eventually got through to someone.

“She said to me I’ll explain what happened, so I gave her my full name, my account number and sort code, thats all I gave her and she said someone has tried to buy goods at Argos for this amount”. Mr Cusbia said he had received a code, which the woman asked him to verify. It didn’t occur to him that the whole process could of been fake until he got home.

“They were so professional and I didn’t click for a minute it was fake. The only reason I realised when I got home because I got another text message saying I had set up a new recipient”.

He and his wife checked their statements, which confirmed the worst: their funds had been transferred to a company they had never heard of.

“We took a lifetime to save that money not for somebody to just get in there and take it away in 20 minutes”.

The couple were initially told by TSB that they would not be refunded, which was a devastating blow to the family.

Mr Cusbia said: “I’ve got an autistic lad who is 27, when we go we need to build something for him”.

TSB have now said, after reviewing the case, that they will refund the family their money.

In a statement released by TSB, the bank stated: “Whilst we are doing everything we can to ensure customers don’t become a victim of fraud, unfortunately fraudsters are increasingly sophisticated. We have made a firm commitment that customers that have been a victim of fraud as a direct result of our recent IT issues wont be left out of pocket”.

This case once again illustrates how sophisticated fraudsters have become and how cautious we all need to be. You should never give anyone your bank account number or sort code. A genuine caller from a bank would not ask for this information. If you are in doubt at any point, end the call immediately. Call your bank back from a number on your banks website, or visit your bank in branch.

Finally, if you do suspect a caller or text is fraudulent, Report it!