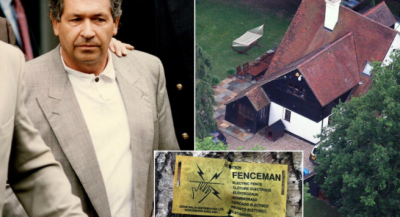 The family of a notorious criminal, originally from Solihull, have offered £100,000 reward to anyone who can help find his killer. John Palmer started out as a scrap metal dealer. He acquired the name ‘Goldfinger’ after he was cleared of handling stolen gold bullion in 1983.

He was shot dead 3 years ago in the garden of his Essex home, Police believe that this was carried out by a hired Gunman. Back in March 2016, detectives revealed Palmer may have been murdered over rumours that he knew who had committed the Hatton Garden Heist and acted as an informant to police. He was killed just two months after nine men were arrested for the £14 million robbery.

Police then went on to appeal for more information on BBC’s Crimewatch, where a crime re-enactment was shown. To date, there have not been any arrests made in connection with the murder. 24th June 2018 marked the 3 year anniversary of his death, prompting Palmers family to make another appeal and offering a substantial reward.

The gunman was said to have jumped into Palmer’s garden in South Weald, Essex and shot Palmer three times from point blank range. He was then struck a further three times in the back as he lay defenceless on the ground.

Palmer’s former partner Christina Ketley, 58, said in a statement issued on the eve of the third anniversary of the murder: “Every day his children and I not only have to live with the fact he was taken from us, but we also still struggle with the way he was taken from us. He was shot in cold blood whilst he was pottering around in the garden of our family home. It haunts us every day to think that whoever was responsible was clearly watching John, stalking him like an animal before so brutally and callously ending his life.”

The family have now offered a £100,000 reward for the information leading to the conviction of any individuals involved in the murder.

Detective Chief Inspector Stephen Jennings, of the Kent and Essex serious crime directorate, said : “My belief is the person responsible in arranging this is someone very high up in the criminal underworld and we would expect if finances were used to purchase this killing you’re talking about a large sum of money. There are undoubtedly people who move within those circles who have information that could help us. I would ask for those people to remember Mr Palmer has left behind a grieving family who are desperate for answers.”

In 2001 he was found guilty of masterminding the largest timeshare fraud on record and jailed for eight years. He served just over half his sentence. It is reported that he scammed £30 million from around 20,000 people through his timeshare fraudulent activities and amassed a fortune of £300 million. He was even ranked 105th, topping the queen on the Sunday Time’s Rich List.

Despite this, Palmer declared bankruptcy in 2005 with debts of £3.9 million.

In 2007, he was arrested, again, on charges including fraud. He served two years in a high security Spanish jail, but was released on bail.

Palmer, who once owned a Jet, two helicopters and a yach,t was thought to be consumed by greed, plotted with others to take customers for every penny through a buy-sell scam, which promised to sell customers timeshares at an inflated price within a specific timeframe, if they agreed to purchase another property from Palmer.

Owners were promised huge profits, but most were left with two timeshares and mounting debts. The timeshare rescale scheme was nothing more than a scam designed to take money from unsuspecting customers who were desperate to get rid of their timeshare properties.

In tactics still seen today, victims were lured to presentations with promises of prizes from scratchcards and subjected to hours of aggressive selling. Staff would even drive people to cash machines, where they were forced to withdraw money.

Palmer’s activities may be no longer, but his tactics are still being used today!

Before entering into a Timeshare, holiday product or Timeshare Resale agreement please consider:

People who enter into timeshare agreements often find it difficult to keep up with the mounting maintenance fees and simply can no longer afford it. They may also find that the timeshare no longer suits their needs and simply want to end the contract.

The mis-selling of holiday products is, unfortunately, common practice within the holiday industry and these types of crimes often go unreported by the most vulnerable in our society, making criminal convictions are few and far between.

If you have purchased a lifestyle or concierge service, a timeshare or a holiday points based product from a resort or company and feel unhappy with the service, or feel you have been mis-sold this product, please get in touch with us to discuss how we may be able to help you with a possible Money Back Claim.