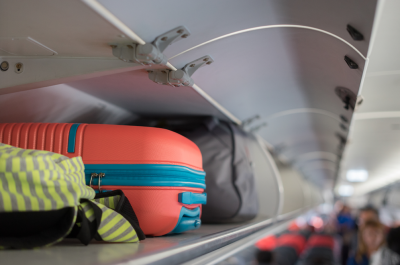 What is and isn’t allowed in your hand luggage can be confusing. These are the current rules on personal items such as scissors, needles and lighters.

UK flights ban numerous items from hand luggage that you can’t take on board – so what can you take into the cabin?

The UK Foreign and Commonwealth Office (FCO) explains the rules on its website. It covers scissors, needles, tweezers, corkscrews, matches, lighters and more. Scissors of certain sizes are allowed onto the plane. Small scissors (with blades no longer than 6cm) and round-ended/blunt scissors are acceptable in hand luggage. Large scissors (with blades longer than 6cm) are not allowed – and the FCO advises checking with your airline if you intend to pack them in your hold luggage.

Needles are an item that many travellers are unclear about. But in fact, airlines allow both sewing needles and knitting needles on board.

Beauty items such as nail clippers, nail files, tweezers and fixed-cartridge razor blades (disposable razors) are all fine too.

A corkscrew, however, cannot be packed into hand luggage, nor can a knife with a sharp or pointed blade and/or blade longer than 6cm.

A spoon, though, is perfectly acceptable along with umbrellas, walking sticks, walking aids, pushchairs and wheelchairs, which are all allowed in the cabin with passengers.

Many fliers may presume that matches are an obvious no-go on board, but safety matches are in fact allowed. However, they are not allowed in the hold.

Cigarette lighters are classed as something you can’t pack in hand luggage, but the FCO adds that they can be kept on your person. “You can only carry one lighter on board,” the website states.“You should put it inside a resealable plastic bag (like the ones used for liquids), which you must keep on you throughout the flight. You cannot: put it in your hold luggage or put it in your hand luggage after screening.”

Another confusing area when it comes to hand luggage is medicine and what medication can be taken onboard. Essential medicine that is over 100ml is allowed onboard, according to government advice.

It is advised to take enough medication into the cabin, in the event that the luggage in the hold is lost.

You should also check with the country you are visiting; some countries ban certain medicines that are permitted in the UK. For example: Greece and China have a total ban on medicine that contains codeine.

Documents from a medical professional will need to be provided, such as a doctor’s note or a copy of the prescription.

Liquids may be subject to additional screenings and need to be opened when going through security. Otherwise tablets, inhalers, gel masks and liquid medicines that are prescribed are all permitted.