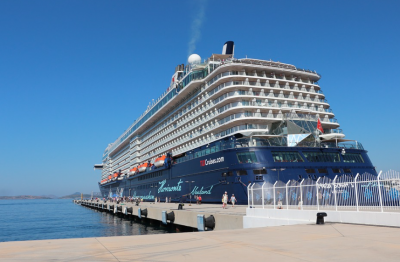 A norovirus outbreak onboard a Tui cruise liner, forced passengers to stay in their rooms after falling ill.

Three British holidaymakers claim their dream adults only cruise, was totally ruined when they were struck down by a serious case of the norovirus stomach bug.

One couple, spoke to the Chronicle Live and explained how they had suffered symptoms such as diarrhoea, vomiting and painful stomach cramps. The couple claimed they were ordered to stay in their room on board the ship. They had paid just under £3,000 for their Mediterranean Cruise, and are seeking compensation for time off work because he was so unwell when they returned home.

Another couple who paid £2,980 for their cruise, claim they started suffering from stomach cramps, sickness and diarrhoea four days into the trip. They claim they too were ordered to stay in their cabin. She told the Chronicle Live: “This was our first time on a cruise and we were very excited. But the whole experience was awful. We were able to enjoy the majority of our holiday, and when we arrived home on May 1, my husband had to take another two days off his work as a joiner due to being unwell. It has really made us think twice about booking another cruise in the future.”

Two friends who boarded the ship said they both became ill after six days with similar symptoms, but also had a sore throat and cold sores. Her trip cost £1,300 and she claims to have been diagnosed with norovirus when she saw her GP on her return.

She said: “After boarding the cruise ship, it became apparent people were ill. Things were so bad that I saw staff occasionally spooning out food to people and handling the glasses, as well as asking people if they had washed their hands and using tissues to open toilet doors. All the pools were closed off. But this clearly wasn’t enough, and I noticed that food was not served hot enough and it was left uncovered for periods of time. I booked the cruise a few months ago and I was really looking forward to it, but it was completely ruined because I was so unwell and couldn’t enjoy my time on or off the ship. This is not something you expect when you go on holiday, it was meant to be a memorable break, but now I will remember it for all the wrong reasons.”

A spokesperson for Tui said: “we are very sorry to hear of these customers experiences on Explorer 2. As this is now a legal matter, it would be inappropriate to comment further. We’d like to reassure customers that we regularly audit all of our cruise ships in respect of health and safety, including hygiene.”

Norovirus is a stomach bug that causes vomiting and diarrhoea, with other possible symptoms including nausea, fever, a headache, and aching arms and legs, the NHS says. Also known as the “winter vomiting bug”, it can be very unpleasant, but it usually goes away in about two days. The symptoms usually start within one to two days of being infected. It can be spread very easily from close contact with someone with norovirus, touching infected surfaces or objects and then touching your mouth, or eating food that has been prepared or handled by someone with the illness. The best way to stop it from spreading is washing your hands frequently with soap and water as alcohol hand gels does not kill norovirus.