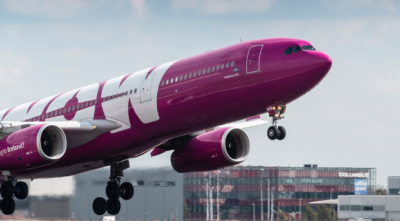 The airline announced the closure in a statement posted on its website. It has advised passengers to book new flights on other airlines, and said some may be eligible for compensation. Stranded passengers have taken to social to voice their opinions, with one describing scenes of chaos at Toronto airport and another said it was “pandemonium at the gate” in Newark.

The airline operated flights from London Stanstead and Gatwick, operating both short and long haul flights, flying to Copenhagen and Alicante in Europe and Washington and Boston in the US. Wow Air told all passengers with flights booked should seek new flights with alternative airlines. Wow Air said it would publish the details of ‘Rescue fares’ once this information becomes available. Rescue Fares are offered to passengers who have unexpectedly had their flights cancelled, they are often offered at hugely discounted rates.

The airline is also telling passengers to get their money back through their insurance, credit card company or travel agent. The airline posted the following statement on their website: “Passengers may also be entitled to compensation from Wow Air, including in accordance with European regulation on Air Passenger Rights. In case of a bankruptcy, claims should be filed to the administrator / liquidator”.

Wow Air attempted to secure a last minute cash injection, however talks collapsed, forcing the airline to close operations. After grounding all flights, the airline said all passengers have been informed of the move via text and email alerts, the airline added: “Passengers scheduled on flights to and from Iceland with Wow Air on Thursday March 28 are entitled to cancel their reservation for a full refund or change their reservation to the next available Wow air flight. Wow Air apologises for the disruption to travel plans.”

Wow Air was founded in 2011, employed over 1,000 people, carrying 3.5 million passengers last year in its 11 aircraft.  Wow Air is the third airline to close this year alongside Germania and Flybmi.

What to do if you experience problems with your flight